Walt Bentley
UC integrated pest management entomologist Walter Bentley has received the UC Agriculture and Natural Resources Distinguished Service Award for Outstanding Extension in recognition of his 34-year career dedicated to the development and delivery of practical, relevant and sensible pest management programs to the people of California.

Bentley was named the UC Cooperative Extension entomology advisor for Kern County in 1977. In 1994, he was promoted to his position with the IPM program and relocated to the Kearney Agricultural Research and Extension Center in Parlier. Bentley was nominated for the award, a statewide honor, by his colleague, UC IPM nematologist Peter Goodell.

Goodell said Bentley has had only two driving forces in his career: create practical yet high quality entomological knowledge based on science and direct that knowledge to make a difference in the lives of the people he serves.

"Mr. Bentley's career represents the best UCCE's faculty has to offer: unselfish service, loyalty to his peers and clientele, intellectual honesty, dedication to the mission of UCCE and a genuine love for his work," Goodell wrote.

Dahlberg served as research director for the National Sorghum Producers and the United Sorghum Checkoff Program. He also previously served as the USDA Agricultural Research Service (ARS) curator for sorghum. He returned to his home state of California in December 2010 to work as director of the Kearney Agricultural Research and Extension Center in Parlier, Calif.

Dahlberg has worked tirelessly to strengthen sorghum research to promote the crop and increase industry opportunities. His accomplishments in the sorghum industry include increasing federal sorghum funds to USDA-ARS by more than $6 million, introducing 200 new exotic parents into the Sorghum Conversion Program, and re-evaluating and improving genetic sorghum descriptors, which have been used to collect data on nearly 8,500 accessions of sorghum growing in various regenerations.

He is the past president of the Whole Grains Council, served as chair of the Sorghum and Millet Germplasm Committee, and was formerly the secretary of the International Sorghum Genomics Committee that worked to get sorghum sequenced. He also led research efforts in conjunction with National Renewable Energy Laboratory (NREL) on a U.S. Department of Energy Sorghum to Ethanol grant.

“This is the highest award for a member of the sorghum community,” said Bruce Maunder, research advisor for the United Sorghum Checkoff Program, who also received the award in 1985. “Jeff is very deserving of such recognition for his contributions to this industry.”

NSP congratulates Dahlberg on this honor and is grateful for his contributions to the U.S. sorghum industry. L. Peter Christensen
L. Peter Christensen passed away peacefully at Hinds Hospice in Fresno, on Sunday, Sept. 25, 2011. Born in Selma, Calif., on Nov. 1, 1934, he was the grandson of Danish immigrants. Both his grandfather and father were grape growers in Selma. A devoted, loving, self-sacrificing husband and father, Peter wed Eleanor K. Honzik in 1960, with whom he was married for 51 years and raised three sons in Fresno, California.

Following his graduation from UC Davis, he joined UC Cooperative Extension as a farm advisor in Fresno County, where he spent 23 years working with the local grape industries. In 1984 he advanced to the position of viticulture specialist in the Department of Viticulture and Enology, stationed at the UC Kearney Agricultural Research and Extension Center in Parlier, where he retired in 1999. Working closely with colleagues in academia and industry, he conducted practical research on a broad range of topics. Much of this work had immediate and long-lasting impact. For example, the mineral nutrition and diagnostic and fertilizer recommendations for California vineyards are largely based on his research and extension activities. He authored or co-authored over 250 technical papers and research articles during his career, including several seminal publications on grapevine nutrition and the statewide UC production manuals on raisin production, wine grape varieties and grape pest and disease management. He received the Best Research Paper Award from the American Journal of Enology and Viticulture in 1986 and 1990, and also served as the President of the American Society for Enology and Viticulture in 1991-1992. In 1997 he was presented the James H. Meyer Outstanding Career Achievement Award from UC Davis, and in 2004 he was given the Merit Award of the American Society for Enology and Viticulture. The latter is the highest honor given to a grape research scientist in the U.S. In recognition of his outstanding contributions to the California raisin industry, the newly developed raisin grape variety "Selma Pete" was named in his honor in 2002.

In addition to his outstanding research contributions, Peter was a gifted, thoughtful and generous extension educator and mentor to young scientists. He presented hundreds of technical talks to Central Valley grape growers, and also trained many UC Farm Advisors during his career. His impact extended far beyond California, and he visited many different countries on sabbatical leaves and technical trips, including Australia, New Zealand, South Africa, Greece, Italy, Chile, Mexico, Japan, Canada, Uzbekistan and 11 States in the USA.

Peter is remembered by his family, friends and colleagues, and by grape growers throughout the Central Valley and beyond, for his unfailing readiness to help and serve, for his humility, and for his good nature and sense of humor. He was a faithful member of the St. Peter the Apostle Serbian Orthodox Church in Fresno, where he was actively involved in the landscaping and maintenance of the church property. For many years he farmed the family vineyards that he inherited along with his sister. His interests included traveling, writing, cooking (including gourmet meals), gardening, boating, fishing and scuba diving. Family closeness was very important to him, and he frequently arranged family get-togethers and vacations in various parts of the state and in countries throughout the world. After a battle with cancer, he ended his earthly life with his characteristic positive attitude, saying that he could not have asked for anything more in life, that he had no complaints, and that he was deeply thankful to God for everything. In the meaningful time leading up to his passing, he received an outpouring of love from his family and from many others whose lives he had touched, and to whom he had always been a selfless servant.

He is survived by his wife, Eleanor; his sons, John (Fr. Damascene), Robert and Scott; his daughters-in-law, Bonnie and Lorraine; his grandchildren, Jonathan, Emily and Melina; his sister, Jane Hildebrand; and his godparents, Ron and Radmila Tarailo. Jeff Dahlberg discusses the sorghum trial at the Sept. 8 Alfalfa Field Day.
Drought tolerant, fast growing and nearly pest free, forage sorghum has the potential to be a valuable feed crop in California, says Dr. Jeff Dahlberg, a sorghum expert and the director of the UC Kearney Agricultural Research and Extension Center.

Dahlberg introduced San Joaquin Valley farmers to a new sorghum variety trial during the Alfalfa Field Day Sept. 8. The trial, which compares 80 varieties of forage sorghum, is also being conducted at the UC West Side Research and Extension Center in Five Points, Calif. At Kearney, the 10- to 12-foot-high plants were grown in 84 days with just 8 inches of irrigation water.

"I'm going to push this to be a sorghum state," said Dahlberg, who came to California in January from Texas, where he was director of research for the United Sorghum Checkoff Board. "I'm not suggesting you take out all your corn forage, but experiment with this a little. There is no reason you shouldn't grow forage sorghum."

Dahlberg said the crop could be useful in rotation with traditional California crops, like cotton and corn.

"There are lots of acres on the West Side that I think could benefit with sorghum rotation," he said. Alfalfa Field Day participants also viewed alfalfa growing at Kearney as part of an extensive, statewide alfalfa variety trial. Similar plots are being maintained at UC's Intermountain  Research and Extension Center, about two miles south of the Oregon border, at the Desert Research and Extension Center, about 10 miles north of the Mexican border, and at several locations in between.

UC Cooperative Extension alfalfa specialist Dr. Dan Putnam said the data gathered in these trials are provided to growers on the UC Alfalfa and Forage website to help them select a variety to grow, a decision Putnam admonished farmers not to take lightly.

"You are 'stuck' with your variety decision for many years," Putnam said. "So why not take a little care in choosing your variety?" Farmers view alfalfa varieties. Putnam said, "There are some seeds, they should pay you to plant."

Putnam also described an alfalfa trial at Kearney where a Roundup Ready cultivar is growing across the road from a conventional crop. During the first year of the study, tests have shown that there has been no discernible gene flow between the two fields.

Alfalfa grown for seed requires honey bee pollination and has different isolation requirements than hay, he said. A three-mile buffer must be maintained for production of Roundup Ready seed and a five-mile buffer is required for seed grown for markets sensitive to a genetically-engineered trait. However, alfalfa hay crops can be grown in close proximity with very low risk of contamination if growers follow a few simple steps.

Putnam believes that non-GMO farmers can coexist with conventional farmers by using some of the same good-neighbor farming accords that have long been common in agriculture.

"There is a human factor involved," Putnam said. "Neighbors have to get along and respect each others' points of view."

One way for farmers and buyers to be certain a non-GMO crop doesn't have the Roundup Ready gene is with a simple, commercially available test that can be used in the field or on baled hay, shown below. Farmers' DIY spirit can be applied to ag research

Farmers' rugged independence and tendency toward experiential learning make them the ideal candidates for conducting their own on-farm research. UC Cooperative Extension farm advisors will provide the basic tenants for conducting such studies during the Alfalfa Field Day, Thursday, Sept. 8, at the UC Kearney Agricultural Research and Extension Center in Parlier.

"We're encouraging farmers to take a scientific approach in a realistic way," said Carol Frate, the UC Cooperative Extension field crops farm advisor for Tulare County. Frate and Shannon Mueller, the Fresno County field crops farm advisor, developed the presentation. "We'll suggest that the farmer do some replication, take notes and follow through. We'll show them how to evaluate the economics of different treatments."

Frate and Mueller's presentation will be made in the classroom following a three-stop field tour with the following presentations:

In addition to the presentation on DIY on-farm research, the following topics will be covered during the classroom session: 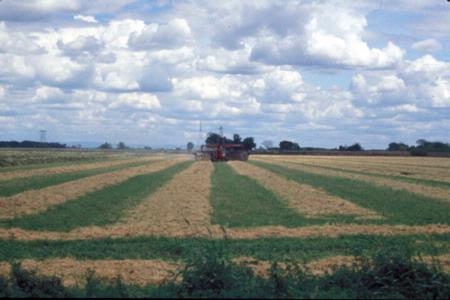