The 42 students received scholarships totaling over $73,000. Aaron Ramirez of Clovis East High School was the recipient of the $50,000 grant-funded scholarship. Aaron’s mother said that after attending the PAL seminar at UC KARE, Aaron became very enthusiastic about exploring a career in agriculture.

For his outreach project, Aaron worked with UC KARE to collect and sterilize owl pellets. He then delivered a training module that taught students in Aaron’s community about the importance of owls as well as determine what pests the owls were eating by identifying the bones in the owl pellets. Aaron plans to attend Reedley College prior to transferring to a four-year university and pursuing a career in agriculture. 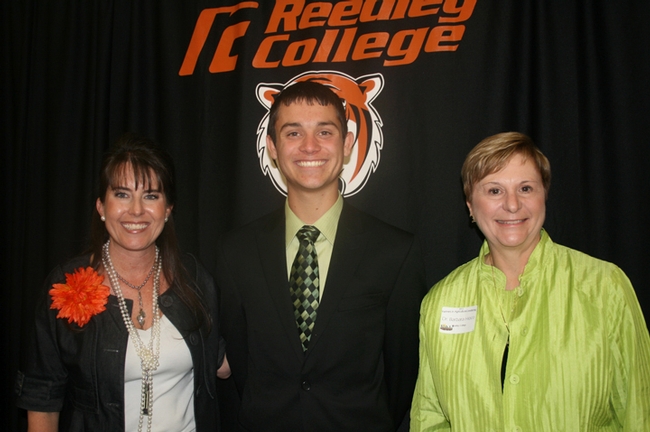 The end of an era

The Kearney community marked the retirement of its long-time computer programmer John Rassmussen today. John came to Kearney shortly after graduating from college to manage a brand new integrated pest management outreach system located at the field station. In 1981, IPM was delving into computer communications by offering a weather database, news features and pest management guidelines that could be read on terminals at UC Cooperative Extension county offices.

The computer at Kearney - with its 96 megabyte hard drive and one-quarter megabyte internal memory - cost $125,000, John said. It was connected to terminals in Bakersfield, Visalia, Shafter and Fresno via dedicated phone lines.

Over the years, as technology advanced, John became the self-taught network administrator and computer support professional for the scientists and staff at the Kearney Agricultural Research and Extension Center. An avid outdoorsman, John plans to spend more time hiking, caving, mountaineering and endurance running during retirement. 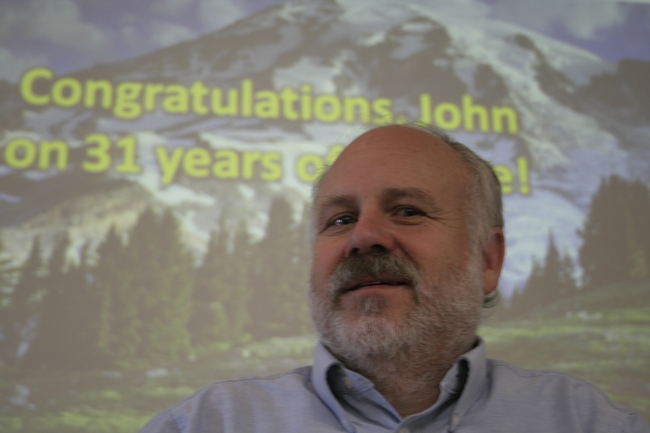 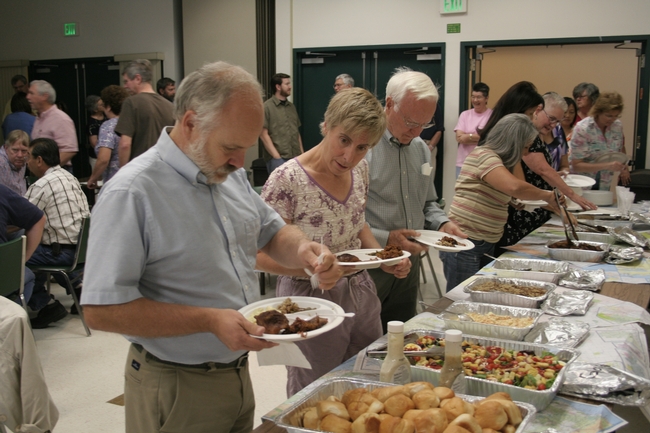 John and his wife Marcia lead the buffet line. 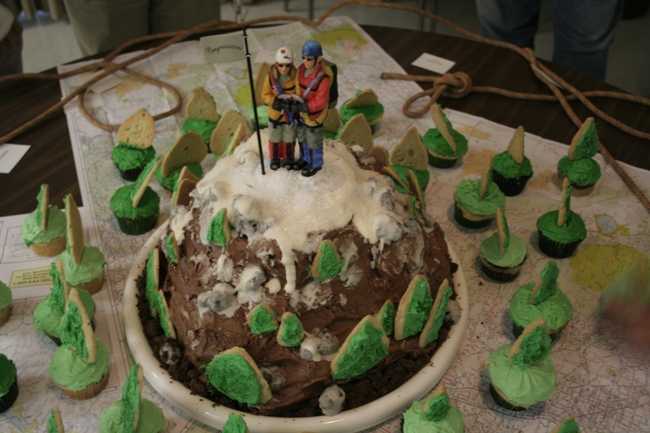 Staff and academics at the UC Kearney Agricultural Research and Extension Center (KARE) hosted the Central California Blood Center's Blood Mobile today. In all, 22 people stepped up to donate a pint.

The Central California Blood Center says more than 75 percent of Americans who reach age 72 will need blood at some point in their lifetimes; 97 percent will have a loved one or friend who will need life-saving blood. Among the most common procedures that require blood are heart surgery, accidents, organ transplants and bone marrow transplants.

Since blood is a fragile, liquid living tissue, it has a limited shelf life. Red blood cells last 42 days, platelets last 5 days, and plasma can be frozen and stored for one year. CCBC is the sole provider of blood donations to hospitals in Fresno, Madera, Tulare, Kings and Mariposa counties. It strives to always maintain a five- to seven-day supply of blood. 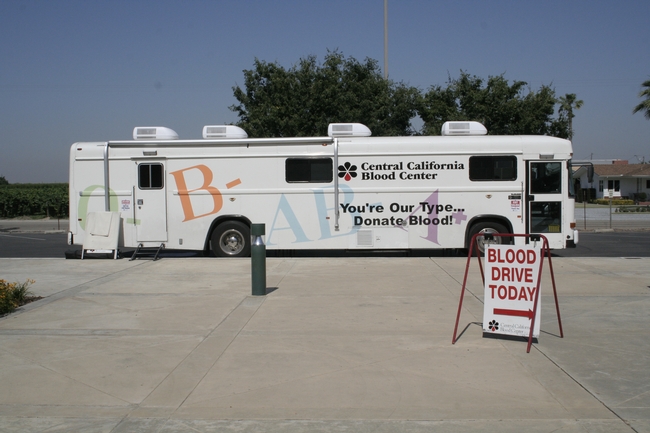 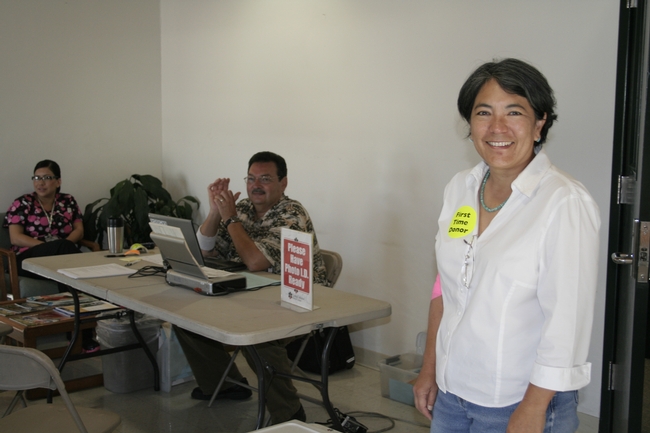 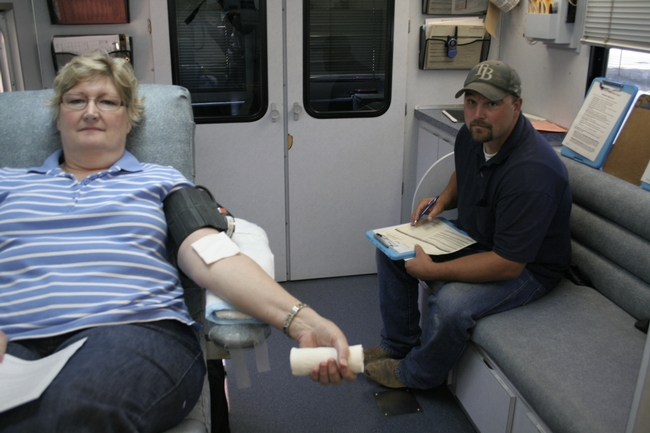 A group of farmers from Tongyeong, South Korea, visited the UC Kearney Agricultural Research and Extension Center today to learn about the scope of research activities under way at the facility.

The visit was arranged by the City of Reedley, situated 4 miles east of Kearney. Reedley and Tongyeong are sister cities.

The visiting farmers produce a diversity of crops in South Korea, including citrus, strawberries, orchids, kiwis, mangos and figs. At Kearney, they toured the post harvest facility, research plots and the greenhouse. This afternoon and tomorrow they will visit local farms and packing houses.

The Korean farmers showed particular interest in UC's Navel and Valencia Export to Korea (NAVEK) program. In 2004, Korea rejected incoming citrus from California when inspectors detected fruit infected with Septoria spot, which is caused by a pest that has not been reported in Korea. UC scientists developed a fruit certification program to ensure that fruit with Septoria spot isn't shipped to Korea.

The Korean farmers' week long trip to the United States will not be all business. They plan to take time to visit the Grand Canyon National Park in Arizona and Las Vegas, Nev., according to their guide, Sonny Er. Lygus could add to cotton challenges in 2011 Tarweed in the foothills.
With the cooler weather and later developing cotton crop in the San Joaquin Valley, 2011 is providing some challenges to cotton production. Add to that challenge the possibility of moderate to severe Lygus outbreaks in some locations.

The large amount of rainfall this winter and spring will set the stage for more Lygus in summer. The relationship between historic rainfall records and annual cotton loss estimates supports the idea that Lygus will be more problematic this year and observations from the ground confirms this assessment. However, as in other years, the primary source of Lygus will be from crops and locations within a few miles of your cotton field, not miles away from the edge of the Valley.

In the past month, I have been conducting the annual Lygus survey. The survey was later than usual because of the extended rainy season into April and cooler temperatures in May. This is what I have observed:

Safflower plays a major role as a plant host bridge, allowing overwinter populations to settle and reproduce. Safflower plantings are spread throughout the Valley and will act as localized sources for Lygus into susceptible crops. The problem can be alleviated by managing Lygus population in safflower before the nymphs can become adults and leave the field. For details on managing Lygus in safflower to mitigate movement into cotton, refer to IPM in Cotton in the Western Region of the US, UC ANR Publication 3305.